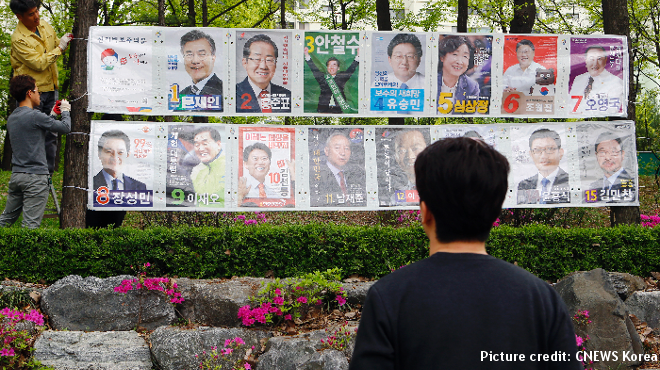 It’s Election Day here in Korea and it is always a festive time of year. There are the “local” elections (for mayor, city assembly, governor and local seats) and for some of the seats in the national assembly. In the past, I have worked on numerous election campaigns from a city, provincial and national level while back in Canada. The elections in Canada usually consist of election signs on the lawns of almost every household, commercials on the radios and televisions, and finally hours and hours of coverage in the media. In Canada, there is no escaping it.

In Korea, there are no election signs on the lawns since most people live in apartments so they don’t own the lawn to put the signs. There are no commercials on Television since most television programs are national in nature rather than local. There may be a lot of media coverage, but since I don’t understand Korean, I don’t notice it as much. Instead, there are trucks with loudspeakers singing songs in praise of the candidates. There are people on every corner waving their arms and encouraging everyone to vote for a number. Candidates are giving a number to vote with the largest party given the number 1, second-biggest party number 2 and so on. This is based on the last election. There are jingles, dancing girls, and loudspeakers roving through the streets. It is more of a carnival rather than an election. It is also reminiscent of elections I have seen on newsreels of the 1960s in Canada.

The parties are the same as in most places with the Grand National Party, which now has the presidency, is the conservative party. They believe in business and think the North Korean government is evil and must be replaced. The second party is the Democratic Party which was the party in power for most of the 2000s and they are more about how business is not necessarily good and think the south should be friends with the North Korean Government.  Then there are the others which range from socialists to arch-conservatives. In all, I believe there are six other parties that have a seat or two in the national assembly.

As an ex-pat, I can’t vote and the great thing about elections in Korea is that it is a National Holiday so all are encouraged to vote. It is the one thing I do wish they would adopt in Canada.