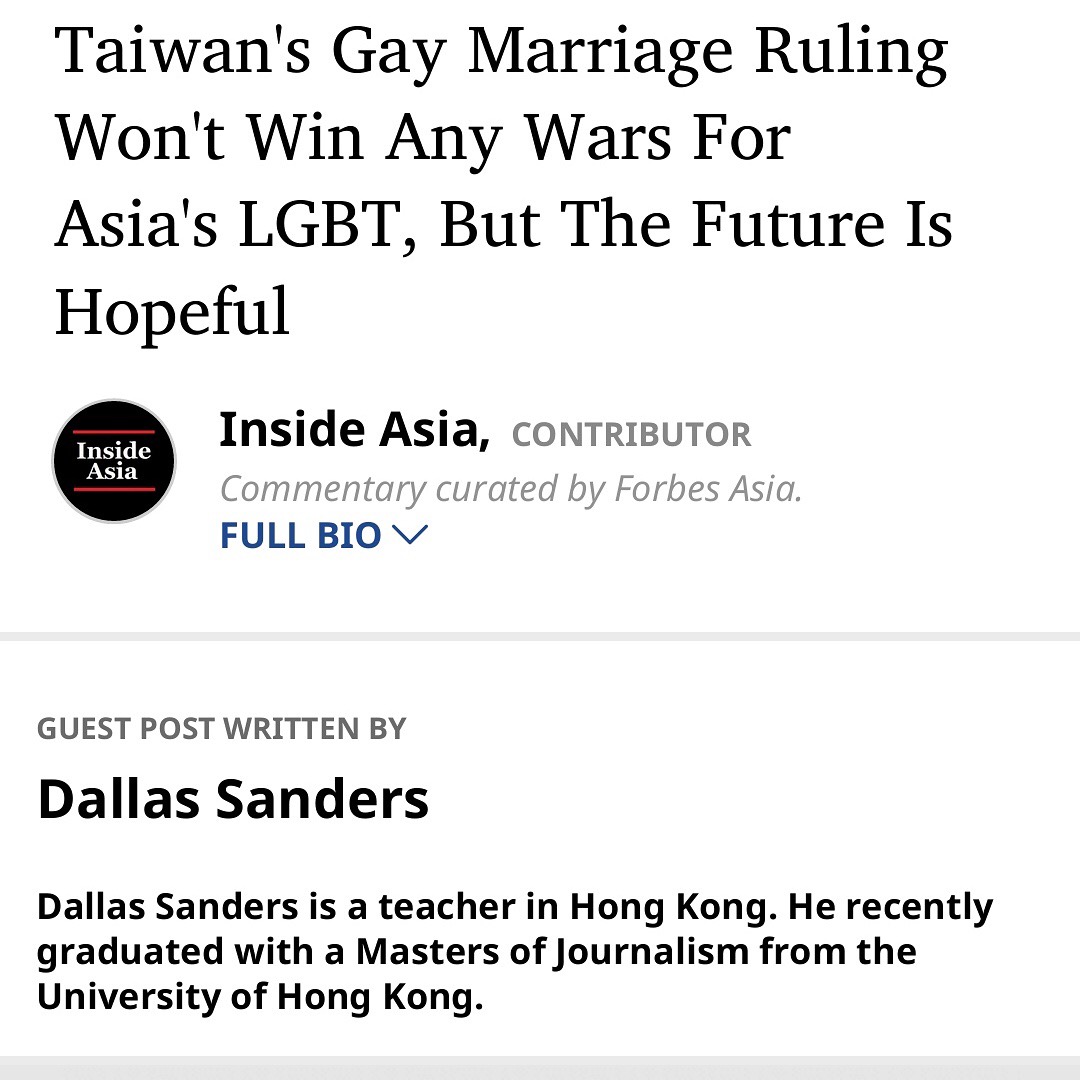 I wanted to write something. The topic was too huge. Taiwan became the first Asian nation to accept same-sex marriage after a court ruling. It’s something I never thought it would happen to be in such a conservative part of the world and living in Korea for such a long time and now in Hong Kong. I just wanted to get something out. When I got offered the chance to write for an international publication like Forbes I took it but was hesitating.

I’ve never been confident with my writing. There are my many grammar issues. My style issues. As well as my worry about “getting it right.” With a topic like this; I thought it would be easy and mostly it was.

The writing flowed out of me. Coming into work, my thoughts were about the structure and how I could approach it. At work, in between the lessons I was teaching, I mapped out a rough plan. Everything was easy since just graduating with a Masters of Journalism from the University of Hong Kong only a week ago. The structure of the article would be easy. Then the message came.

It was from someone I studied with at HKU. She asked if I wanted to write something for Forbes where she works as an editor and said yes but there were some pressures. I still had a few more classes to teach and was worried about the deadline. My initial feeling with most of these things is they want something in an hour, and I had too many lessons. She said the timing would be ok.

My first draft focused on what I knew: My lives in Korea and Hong Kong and my love. How that love has changed the way I look at the world and how things have gone from “never going to get married” to “there is a chance I may.” I thought about all the secret bars, all the closeted gay men I met in Korea and all the rejections for building a meaningful relationship because the guy I was with was worried about his family.

I thought about coming to Hong Kong and how different things were. How I met more gays, who were out to their families and their work. How I met married couples (overseas but not married in Hong Kong) and finally I thought about my friends who have sued the government for equality and how impressive it was how people are willing to fight for the right.

It was received well, but there was a need to bring in other things going on around Asia. Doing some google searches, I found how there were gays being cained in Indonesia. How there were gay Korean military people going to jail for being gay. There were bathhouses in Jakarta being raided and people being arrested. Finally how gay dating apps were being banned in Indonesia. All of these things reminding me how for the world needs to go for acceptance.

The copy was submitted, and then it went online. It felt good, but the next thought was what should I write next?